Throughout the years, the Harvard Club of Belgium has developed into one of the most re-known speaking platforms for global leaders coming to, or residing in, Belgium. As a result of this, the Club has made a mark in promoting, developing and enhancing leadership and leadership models across our community and has contributed to driving positive change in Belgium.

Mindful of this, in 2004 the Board of Directors decided to establish the”Harvard Club of Belgium Leadership Prize”. The Harvard Leadership Prize is awarded annually to a person, or organization, based in Belgium or with links to Belgium, whose accomplishments reflect Harvard University’s legacy of integrity and leadership, and have a lasting impact on our society.

With this Prize, the Club aims to recognize those individuals, or organizations, who combine outstanding leadership with values and behaviors that sustain and strengthen the human and natural environments in which their organizations operate. This award also honors individuals whose professional accomplishments embody such qualities that drive our society forward and have the potential to achieve positive change on our country.

The Harvard Club of Belgium awarded its 2019 Leadership Prize to Margrethe Vestager, Executive Vice-President Designate of the European Commission in charge of the digital agenda “Europe fit for the digital age”, as well as the current Competition Commissioner. The purpose of this prize is to promote the principles and values of leadership of Harvard University. It is awarded each year to a person or organization that exemplifies in their own and unique way these values and principles and is established in or maintains strong links with Belgium. Architects of positive change, the winners reflect and contribute to the integrity and leadership long advocated by Harvard University. 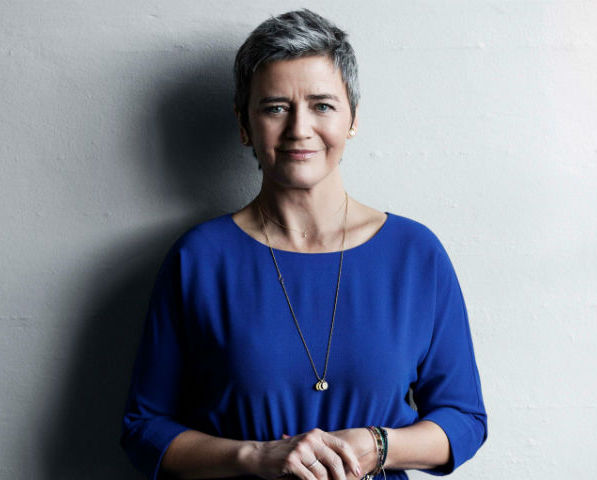 In conferring this prize, a decision the board of directors of the Harvard Club had reached well before her recent re-appointment and extension of responsibilities within the new Commission, and which is essentially a-political and not representing or supporting any view of the merits of specific policies, political agendas or decisions, the board intends to underscore the importance of the key leadership qualities, practices and behaviours Mrs.Vestager exemplifies by the way she embodies a relentless and unbiased pursuit of core principles that are fundamental and especially relevant at these critical times for a proper functioning of our European democracies and societies.

A former Minister for Economic Affairs and the Interior and former Deputy Prime Minister in Denmark, former Minister for Education and for Ecclesiastical Affairs, Political Leader of the Social Liberal Party in Denmark and President of the ECOFIN Council, among others, Mrs. Vestager throughout her impressive and unprecedent career has demonstrated a passion and a consistent pursuit of neutrality, impartiality and rigor, and has not refrained from taking difficult and unpopular decisions when based on informed and in-depth judgment and a profound conviction they were the right ones to take and the right thing to do.

In a speech receiving the prize, Commissioner Vestager said “We all come to leadership with our own backgrounds and histories, with the experiences that drove us to take part in leadership in the first place. But to be truly effective leaders, we need to take the time to learn how the world looks, seen from other perspectives. And the more unfamiliar those perspectives are, the more we need to do, as leaders, to actively seek them out.”

Jean-Albert Nyssens, President of the Harvard Club of Belgium: “With the current international tensions, the climate challenge and the frenetic pace of change in technology, business and society at large, Europe needs strong leadership more than ever. We are delighted that Mrs Vestager has accepted this prize."

About the Harvard Club of Belgium

The Harvard Club of Belgium (HCB) is one of the oldest and largest American university associations in Belgium. This organization brings together more than 900 Harvard graduates who live and work in Belgium or maintain close ties with our country.